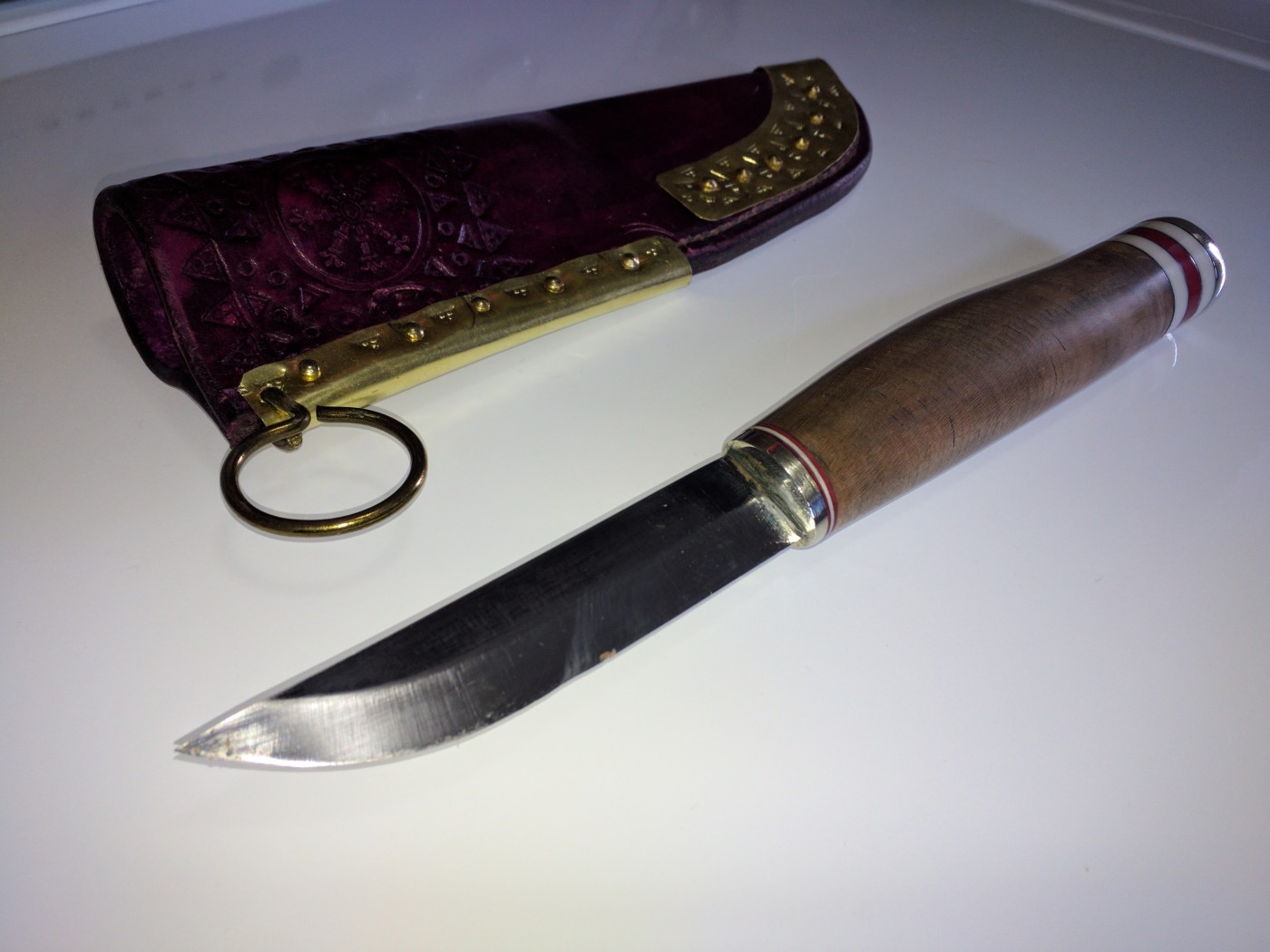 I wanted to give the new king and queen of Æthelmearc gifts for their Coronation. I like to give people stuff, and they do Northern European dark ages personas, and that was really all the reason I needed. 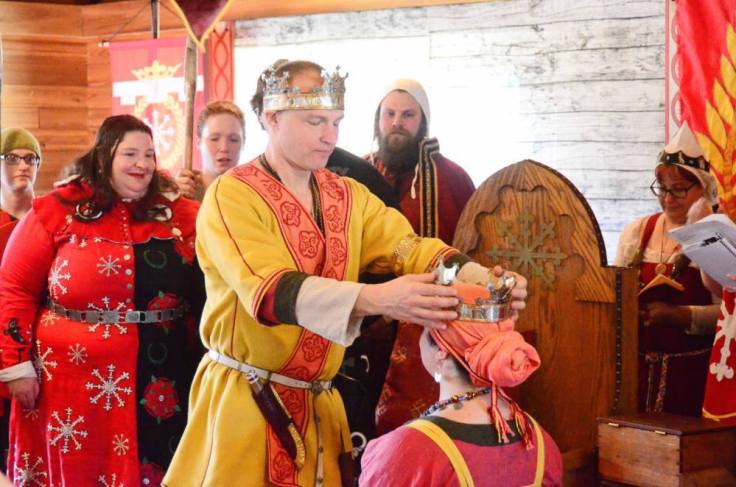 HRM King Sven crowning HRH Siobhan as his queen. The knife on his belt is the one I made for HRM Siobhan – she wasn’t wearing garb that incorporated a belt for coronation, so he appropriated the knife for the day.

I decided on a belt knife for Queen Siobhan and a rattan seax for King Sven. I made them with matching pommels of red and white, with a black vulcanized spacer material and German silver caps. The white parts look like bone, but are actually Corian, a durable synthetic material mostly used for kitchen countertops. The red is stabilized coral. This post is about the knife; I’ll talk about his seax in another post. 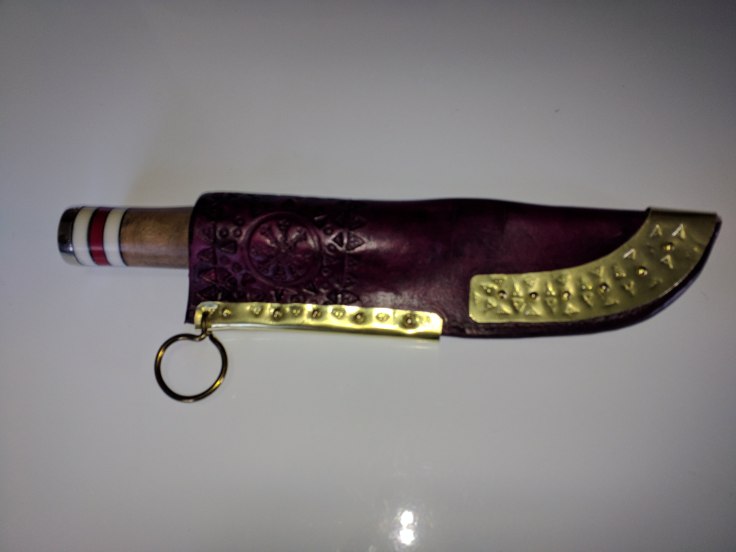 I’m not a blacksmith, so I sourced a blade blank for as authentic a source as I could find. The blade blank is from Laurin Metalli OY company, made in Kauhava, Finland, and has a maker’s mark from them on the blade. Laurin Metalli OY doesn’t make finished blades, but supplies blades to a wide variety of other makers. The blank had a wide, gradually tapering tang, and a full Scandinavian-type grind on the blade. It wasn’t highly polished, in fact still having some forge scale on the flats when I received it. The blade is a heat treated carbon steel blade made of 80CrV2, and is an extremely sharp and strong working blade. 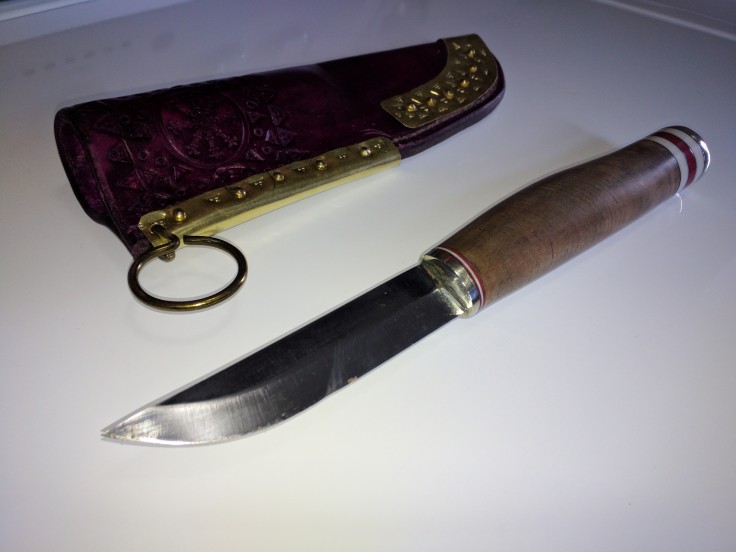 The knife’s handle is some burl cherry from my father’s woods in upstate NY, USA. He’s a master carpenter, making heirloom wood furniture, from felling his own trees and sawing the lumber, to the finished products. He often finds little pieces of hardwood burl, spalting, and interestingly figured wood, and gives me the offcuts and waste scrap for projects like this – after all, I need very little for a knife handle. I have a big box of tiger maple, black walnut, ash, cherry, and lots more. More than I’ll probably ever use, honestly.

I’d been eyeing this piece of wood for something cool for a while, and decided to use a little piece on this knife. It ended up being lovely. 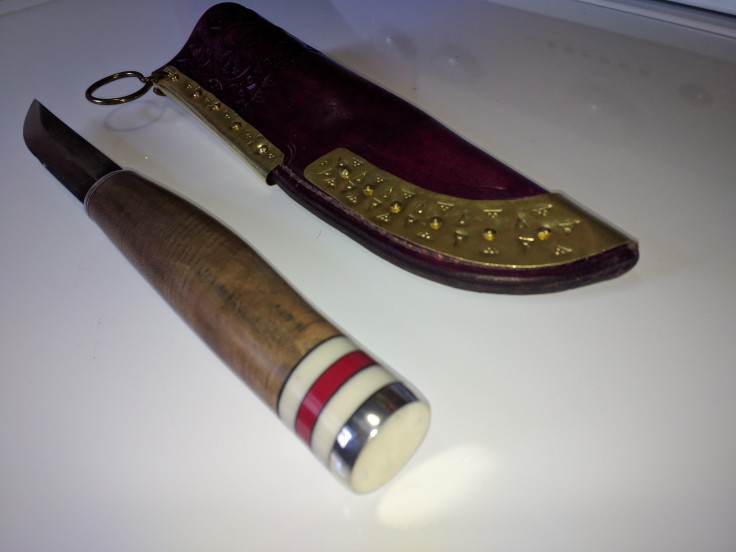 To start, I used a Mapp gas torch and some flux to silver solder the upper bolster of German silver to the blade blank. This needed a lot of filing and shaping to fit. Once it was soldered in place, the blade itself was covered with liberal amounts of masking tape, to protect it and me during the rest of the build. Right underneath it, I laminated together three pieces of vulcanized spacer material with 2-part epoxy in a red-white-red layout to match, yet contrast, the pommel. I punched the appropriate hole through the spacer and set it aside.

Next, I drilled a hole completely through the block of wood I had. This block was about 2″ x 2″ x 5″. This was done with a long-length drill bit and a power drill, while the wood was clamped in a vise. I did some sanding and hogging out of this hole until the tang slid in snugly, then set that aside. The tang was flush with the end of the block. 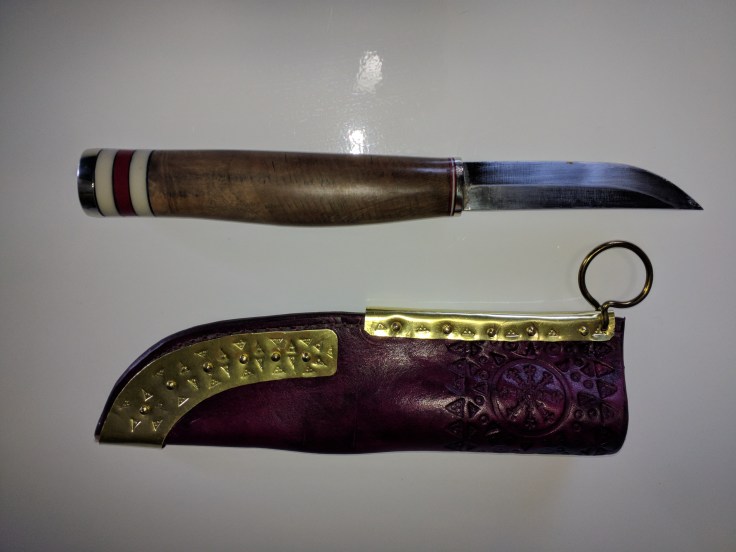 I then constructed the pommel. The layers of corian, coral, and black spacer were laminated together with 2-part epoxy, clamped tightly, and let cure overnight. The next day, I cut a piece of 1/4″ German silver bar for the cap to size, and superglued it to the rest of the pommel. I took the entire assembly to my drill press, and drilled two 3/32″ holes through the entire pommel. these would hold the pins that hold the pommel on the knife.

Once the holes were drilled, judicious use of a heat gun weakened the super glue enough that I could pop off the German silver cap. I sanded off the superglue residue, and silver soldered in two brass pins about 2″ long each. As the pins were brass, I had to leave a slight depression on the bottom of the cap, and fill it with silver solder, so the brass of the pin rods would not be visible.

Using more 2-part epoxy, I reattached the buttcap to the rest of the pommel, pushing the pins through the holes previously drilled, and clamped it all to cure again.

When cured, I carefully marked the position for the pin holes to be drilled in the cherry wood handle, and drilled those holes. Then I gathered the upper spacer and the handle I’d set aside before.

The holes and the bottom of the wood were liberally covered in more epoxy, as were both sides of the upper spacer material, and the entire hole through the handle was filled with epoxy. The tang of the blade was inserted through the upper spacer, and through the handle, and the pommel was installed with the pins into the wood. Again the entire knife was clamped to cure. I have a special board I made that has a slot for the blade to pass through that allows me to clamp the entire knife evenly, using a scrap board on the bottom, sandwiching the knife lengthwise between them. 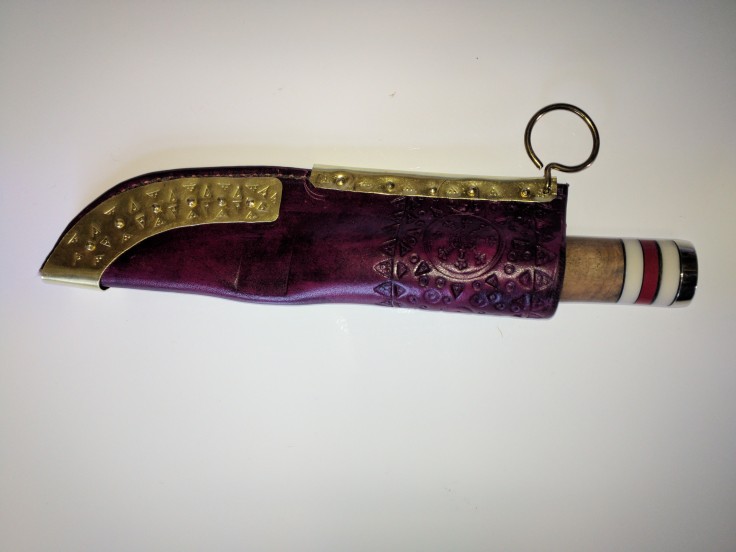 Once all this epoxy had cured overnight, I had a big square lump of a handle thing, with dried epoxy all over it. The entire knife handle was carefully shaped on a variety of belt sanders, taking care to not get it too hot, then hand-sanded the handle into it’s final shape, using progressively finer grits.

Finally, the masking tape was removed from the blade, the entire thing was buffed with two grades of polishing compound, and the handle was given a coat of satin polyurethane.

The scabbard was a straightforward waterformed sheath of heavy vegetable tanned leather, dyed with a commercial leather dye. All the stamps used (except the escarbuncle, which I had made for me) were made by myself, in imitation of the stamped decoration found on Viking jewelry. The brass embellishments were also stamped with these stamps, and riveted on with brass trim nails as rivets. A brass ring was added to the top to suspend the knife from.

No documentation for this. The form is easily documented, however, and still exists to this day as the Finnish puukko knife, the national sidearm of working men in Finland.